The New Year in Nepal starts on Baishakh. Baishak is the first month of Bikram Sambat Calendar.
Bikram Sambat is the official calendar of Nepal. Nepal celebrates nine different new years in different times of year.

Buddha Jayanti is the birth day of Lord Gautam Budhha. Budhha’s original name was Sidhartha Gautam. Siddhartha Gautam was born about 543 BC in Kapilvastu of Nepal (नेपाल).

The Isra and Miraj (Arabic: الإسراء والمعراج‎,), are the two parts of a Night Journey (Arabic: Lailat al-Mi‘rāj, Persian: Shab-e-Me`raj) that, according to Islamic tradition, the prophet of Islam, Muhammad took during a single night around the year 621.

According to traditions, the journey is associated with the Lailat al Mi’raj, as one of the most significant events in the Islamic

A decade-long People’s Revolution by the Communist Party of Nepal (Maoist) along with several weeks of mass protests by all major political parties of Nepal in 2006, culminated in a peace accord and the ensuing elections for the constituent assembly voted overwhelmingly in favor of the abdication of the last Nepali monarch Gyanendra Shah and the establishment of a federal democratic republic on 28 May 2008..

Some Hindu devotees observe fasting in Asthami. The night of Astahmi is called “Kal Ratri” (the dark night). Hundreds of goats, sheep and buffaloes are sacrificed on Kali’s temples and households.

Maha Navami is the ninth day of the Navratri festival and is the final day of worship before Vijaya Dashami, the end of Navratri. On this day, Goddess Durga is worshipped in different forms in different parts of the country.

Maha Navami is celebrated on the navam (or the ninth) day of the Shukla paksha in the Indian month of Ashwina. According to English calendar, this falls in the months of September and October.

Vijayadashami also known as Dussehra or Dasara or Dashain or Tenth day of Navratri or Durgotsav is one of the most important Hindu festivals celebrated in various forms, across India, Nepal, Sri Lanka, and Bangladesh. The name Dussehra is derived from Sanskrit Dasha-hara literally means Dashanan ravan (Name of devil & in short Dasha and Hara (defeat) referring to Lord Rama’s victory over the ten-headed demon king Ravana.

At the end of the Hajj (annual pilgrimage to Makkah), Muslims throughout the world celebrate the holiday of Eid al-Adha (Festival of Sacrifice). In 2015, Eid al-Adha will begin on or around September 23rd, and will last for three days.

During the Hajj, Muslims remember and commemorate the trials and triumphs of the Prophet Abraham.

Lakshmi Puja is a Hindu religious prayer sung on Amavasya, the third day of Diwali. It is often sung during the Tihar festival in Nepal. Adherents show reverence to the Goddess Lakshmi by placing small oil lamps or candles inside and outside their homes. They pray for prosperity and well-being for their families and businesses.

According to legend, Lakshmi, the goddess of wealth and Vishnu’s wife, visits her devotees and bestows gifts and blessings upon each of them

Bhai tika is the last day of Diwali celebrations in Nepal. It is the most important day and is also known as Bhai tihar. On this brother and sister day, sister pray to Yamraja for her brother’s long life and prosperity.

Martyr (Nepali: शहिद; Shahid) in Nepal is a term for some one who is executed while making contributions for the welfare of the country or society. The term was originally used for individuals who died while opposing the Rana Regime which was in place in the Kingdom of Nepal from 1846 until 1951

The Kingdom of Bahrain celebrates the16th December as ‘‘National Day’’. 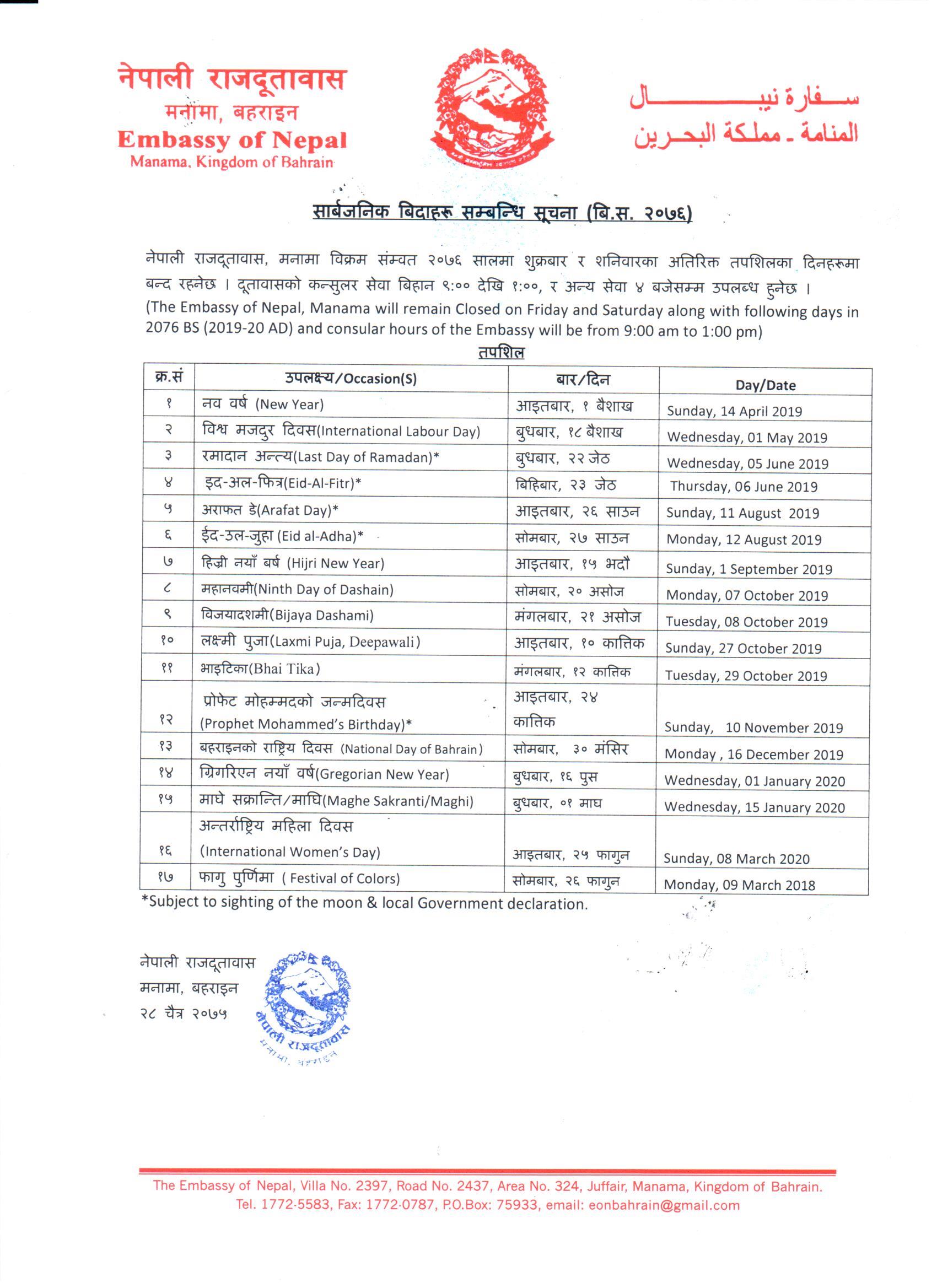